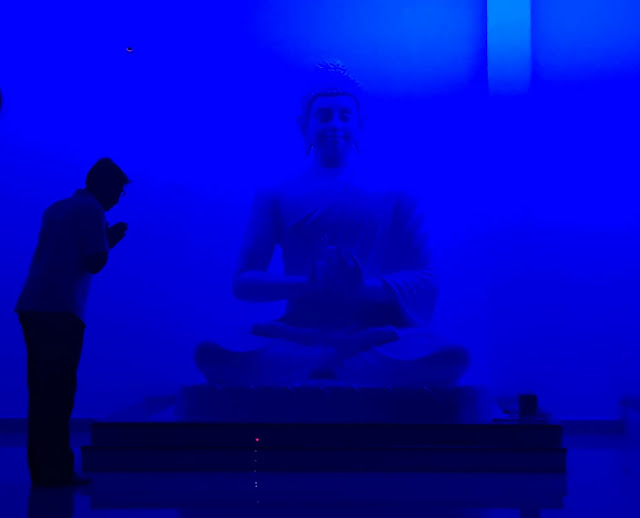 Reincarnation was one of the ideas that seemed like a religious metaphysic that did not correlate with Buddhism's minimalist methodologies. The Dharma is a way to move towards enlightenment, that is all. If believing in something helps that, OK, but mostly understanding that everything is impermanent is more likely to help.

Conditionality has a funny psychological effect. If you think about causes and conditions long enough you can imagine yourself as everyone on the subway. You can see in their body language, how they are dressed, what they are doing--their whole being. I have been everyone and I will be everyone.

Every day we wake up is a new rebirth. But that is not what they thought in ancient India. And my above metaphor might not be what they meant--empathy into all existence.

The Wheel of Life is a specific take on conditionality. It leads you through how life is perpetuated. The gap between sensory input and what you conclude from it is where all the mistakes are made.

I can't help but think of Forever War and Forever Peace. They have created robots that fight for you, but being connected to your platoon leads to enlightenment, so they get you out quickly, you can only work in short shifts. Would we all be enlightened if we were connected deeply with our minds. That is the hope of empathy.

Analayo is pointing out that the Buddha realized past lives in his book. Realizing past lives is a step in the progression of the Buddha's enlightenment. Analayo wrote a book about Reincarnation, and in a talk I watched, he talked about little kids who recite the sutras, though they can't even read and don't speak the language they are reciting the scriptures in. His idea is that probably only reincarnation explains this phenomenon. I'm not convinced. I'm more convinced that as the Buddha neared enlightenment he remembered past lives. In my mind that was an insight about conditionality and my experiences on the subway that I could imagine all these lives. I can imagine being Caesar or even Trump's reactive arrested development.

The short upshot is that I feel like reincarnation is less unimaginable.

More of a problem in modern times is believing in moving towards enlightenment is possible and significant.

I met a Tibetan Nyingma Buddhist in my neighborhood. I was so excited.

Reincarnation was a big reason Stephen Batchelor turned from Tibetan Buddhism to Korean Buddhism, and later developed Buddhism Without Belief.

Conditionality is the thing.
Posted by S. Bell at 8:37 AM No comments:

Email ThisBlogThis!Share to TwitterShare to FacebookShare to Pinterest
Labels: reincarnation 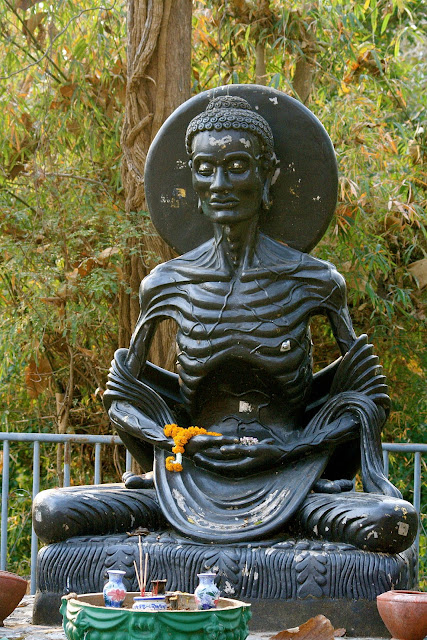 It's amazing that the Buddha knew there was more out there. He'd tasted the heights of pleasure (for a heterosexual) by living in a house where there were only women and they were there to please him. He left his family and home to search. He went to 2 teachers who could do amazing meditations. But still they were not enough. He spent years in ascetic practices--fasting, bearing the elements (heat, cold, wet), physical discomfort, controlling his breathing.

The idea of transcending desires, Nirvana, was his goal. To go beyond illness, old age and death. His mind control was so good he was not even overwhelmed by the painful feelings of his asceticism.

Any temporary victory did not lead to not having a struggle again and again.

It is just like meditation. We can only not take up the unwholesome ideas. It is a gradual method, repeated again and again. Here are the strategies for addressing unwholesome thoughts (from Analayo):

-turn to something wholesome.

-think of the dangers of giving into such an unwholesome thought.

-set aside the issue at hand.

-forceful suppression (You don't use an emergency brake all the time, you use it sparingly in extreme cases).

Email ThisBlogThis!Share to TwitterShare to FacebookShare to Pinterest
Labels: A Meditator's Life of the Buddha, Analayo, chapter 6 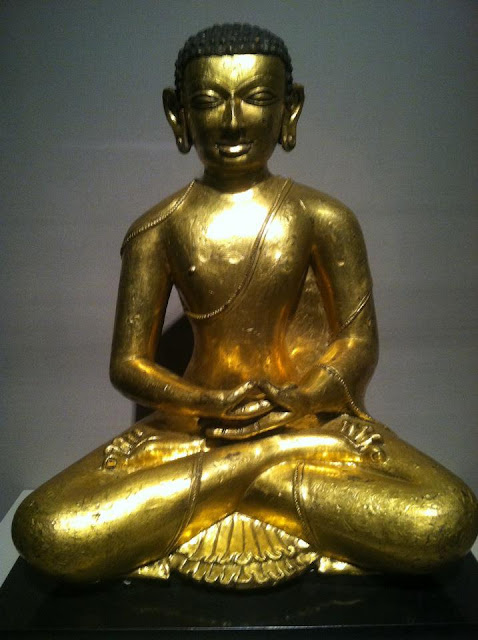 (from the Ruben Museum)

"..saddha is precisely the confidence that it is possible to liberate one's mind from hinderance and defilements." (Analayo 2017)

For some reason this quote catalyzed something for me. The idea that you can actually liberate yourself from hinderances and defilements. For me that means they won't even be gone, but they will be surrounded with mindfulness such that one can be active instead of reactive.

The hinderances of restlessness, doubt, sense pleasure, sloth and ill will. I had to google 5 hinderances to remember ill will.

The defilements are the kleshas:  ignorance, attachment, and aversion which lead to anxiety, fear, anger, jealousy, desire, depression, etc.
Posted by S. Bell at 9:47 AM No comments:

Previous practices of the Bodhisattva:


Loved ones who have long kept company will part.
Wealth created with difficulty will be left behind.
Consciousness, the guest, will leave the guest-house
of the body.
Let go of this life--
This is the practice of the Bodhisattva


We can't fool ourselves that things are permanent. Our sun will expand and encompass the earth, so even the planet that seems so stable and forever, in the cosmic perspective, will end. Things can be ours for a long time, and change is more difficult when we lose someone who's been in our life for our whole life, like a parent, or perhaps a house you've always lived in. Humans are conservative, we don't like change. We do like change for the better, but you can't just siphon out the bad.

Even though you can't take money with you after death, it's great to have money. Looking at the larger picture realistically is important. Through penny pinching my grandfather who grew up during the depression saved a lot of money and invested it, and did well. He did a lot of amazing things with his money but of course he's gone now and can't enjoy it. But think of the Carnegie libraries they built and other social infrastructure. You can have an amazing lasting impact. Maybe it's just in children or the effect you had on other people in your life. Those traces can't go away all together.

Nobody has an original idea. There are some amazing new scientific discoveries and you know, the first 5 minute mile. The Buddha was the first to present enlightenment to everyone. Who knows if someone got there and didn't communicate it, it's hard to imagine someone wouldn't. But you go to college, watch TV, and you're filled with memes. There's one Buddhist who thinks we're Meme Machines. Shakespeare never created a plot, but he created dialogue in a plays that brought humanity to new heights. Every lama in Tibet created their own Buddhism. I could not accurately convey Sangharakshita's dharma, because I just don't know it enough. I must create my own. Even these excursions into the 37 practices is my attempt to make sense of the practices.

Letting go is not easy, to the things we like. Leaving a job you hate is a relief. Letting go refers to the internal resistance not to accept the passing of things we hold onto unrealistically. It's bound to happen, we're human. That's the human drama. Watch any TV show and it's about fighting to let go of something, in many different ways.

This mindset will be part of the ideas into which all the other practices are set.

Continued reflections on A Meditator's Life of the Buddha.

My first thought was that everything is sense desire. When I feel sympathetic joy that my parents are traveling to Machu Picchu in the spring, the joy I feel is a sensual pleasure in my mind. Perhaps they mean non-mind sensual pleasures. Like I need to adjust my pillow my neck hurts. That's a sense desire thought. I say adjust yourself, don't stay uncomfortable.

In the end I know roughly what wholesome and unwholesome thoughts are. Some lead to ruin and come from a small place, are selfish. Others are more large minded, take in the family, the community, the cosmos. The suggestion is to just label thoughts, and usually the changes follow just noticing. Some thought and reflection might go into examining patters and whether thoughts are wholesome or not.

And then the paradigm of wholesome thoughts are contained in metta, compassion, sympathetic joy and equanimity.

Email ThisBlogThis!Share to TwitterShare to FacebookShare to Pinterest
Labels: A Meditator's Life of the Buddha, Analayo

Meditator's Life of the Buddha

Reading Meditator's Life of the Buddha by Analayo, there are two interesting changes in the legend of the Buddha.

The first is that instead of meditating as a young adolescent under a tree, the story is that he had a series of reflections about sickness, aging and death. Not that the two are exclusive. Perhaps the reflection led to meditation. Analayo points out that it's hard to believe he never saw these 4 sights in the legend where he goes out and sees these things for the first time. Perhaps instead he was preoccupied by these things for a long time.

Second is that his stepmother cried when he cut off his hair and put on robes. So he didn't sneak out in the night, or maybe he did, but everyone knew he was going during the day. So that tender image of him gazing on his wife and infant son, well, everyone knew he was going. His family was very much involved in his decision to leave, which does seem natural in those times.
Posted by S. Bell at 11:00 AM No comments:

I am a man of constant sorrow,
I've seen trouble all my day
I bid farewell to old Kentucky,
The place where I was born and raised
(The place where he was born and raised)
For six long years I've been in trouble,
No pleasures here on earth I found
For in this world I'm bound to ramble,
I have no friends to help me now
(He has no friends to help him now)
It's fare thee well my old lover
I never expect to see you again
For I'm bound to ride that northern railroad,
Perhaps I'll die upon this train
(Perhaps he'll die upon this train)
You can bury me in some deep valley,
For many years where I may lay
Then you may learn to love another,
While I am sleeping in my grave
(While he is sleeping in his grave)