The Rise of Skywalker: Spoilers 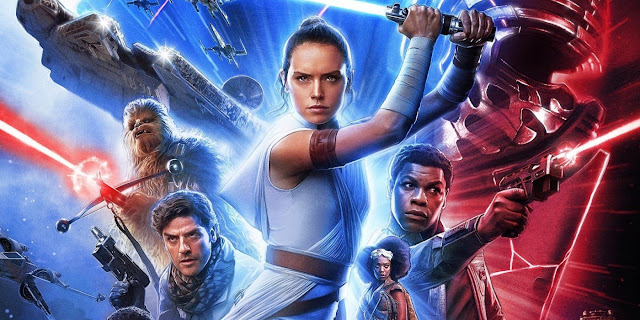 Spoilers start below, so maybe skip this post if you haven't seen it and want to see it. My therapist said he hadn't seen any of the movies, and I was kind of shocked. I know Michael Kay hasn't seen any, that makes me think less of him. And I was in the park talking to a parent and they hadn't seen the movies. So I guess it's not a universal thing to see the movie, and love the space opera.

I was 10 when I saw the first Star Wars movie. The movies have imprinted on my psyche, and I passed on my love of the franchise to my children. My son liked the second trilogy, and saw himself as Anakin, and my younger son saw himself as Obi Wan.

I heard in one talk on Free Buddhist Audio, that one order member in the TBC wished he was a Jedi. I've sort of seen a parallel with Samurai, fighting for justice, through being mindful and cool headed.

One of the tattoos I would consider is the Jedi symbol. The unalome is a Buddhist symbol, but tattoos are not considered good in many Theravan countries, so I've decided not to get one, in the hopes that one day I would travel to one of those countries.

When the 3rd trilogy started to come out there was excitement at being able to see the movies again. My sons wished to see the latest movie with me, but because of availability there was a bit of a wait and one of my sons wanted to just see it. But we got to see it together.

As I sat in the theater before the movie, I had an almost pre-meditative stance of relaxing my body, tuning into my body, and committing to my object of focus. Instead of my breath, it would be the movie.

SPOILERS: The Rise of Skywalker

The movie reveals some interesting connections. Rey is the grandchild Palpatine. Rey chooses to be a Skywalker instead of a Palpatine. When they had the picture of Lea and Luke at the end, where she is choosing her parentage, I thought of the TBC refuge tree. As a Buddhist I choose to be inspired by the teachers of the past.

I realized Star Wars is more of a fantasy movie than a science fiction movie, and the increase in powers of the force helped clarify that for me. I wasn't aware healing was an aspect of it. Rey seems to have quite a lot of powers. The force was conceived by George Lucas as a non-denominational power of spirituality.

When I walked out, I wondered how to neutralize the Palpatine in Trump. I wish the fight between good and evil was that easy. That rallying the forces of good was pretty easy. They could do a whole movie about raising the troops to come fight the death star armada. I thought about D Day when the English helped a retreat, all those private boats coming to rescue the military across the channel. If only knocking out the coordinating things was as easy as knocking out one coordinating bit of technology. They transferred it to another ship but they knocked that out, so why not transfer it to another ship? Seemed a bit simple, I thought about the Borg Vinculum, and my friend making fun of that idea.

Anyway, it was a bonding activity with my sons like fishing or hunting might be to some fathers and sons.
Posted by S. Bell at 1:41 PM

Email ThisBlogThis!Share to TwitterShare to FacebookShare to Pinterest
Labels: Star Wars, The Force, The Rise of Skywalker