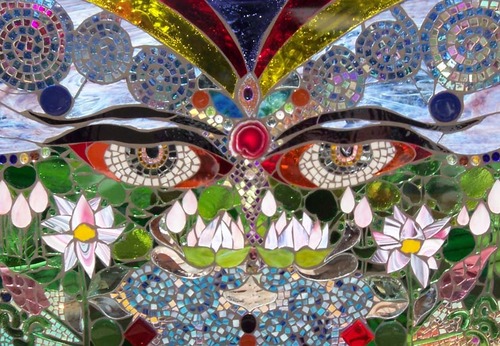 "Job and Jesus, Pascal and Montaigne, evolutionary biology and neuroscience, Roland Barthes and William Blake offer glimpses of self and world that illuminated the path opened up by the Buddha." (p. 183 Living With The Devil by Stephen Batchelor)

What I found interesting about the above quote, is that I bet 100 Buddhist would come up with different lists of people who were enlightened outside of the traditions. And I bet these 100 Buddhists would probably not agree whether there were levels of enlightenment or what touching or coming close to enlightenment meant.

Job had patience, but I don't know enough about him. Jesus had some deep insights that many people groove on. I've dipped into Blake, I should read more of him.

Makes me want to try Montaigne again, I read a few essays and put the book down, even though I got something from it that I use every day. I know very little about Pascal or Roland Barthes.

I think at this point in human history you could become a genius by reading and trying to understand other's works, and you would be 100 times smarter than someone 100 years ago, even the geniuses of the time, but you wouldn't necessarily be original. I think originality happens all the time in problem solving and relationships because every relationship is unique, and every problem is unique in some way. But if you talk about contributing something original to science, mathematics or literature, then that's a harder test.

I've had some dim reviews of my blog, and while my partner reads it, she rarely says, "that was a good post." But I do think that the internet has democratized writing, and that more voices are potentially being heard. People who didn't necessarily find a book contract, can express themselves, and I'm willing to bet there are some real hidden gems on the internet. Sometimes you hear about people who get book deals from their blogs.

I'm hoping some day that Under The Influence of Food gets a book deal. But even if it doesn't, it's awesome that it exists. I think Justin Halpern got a book deal from his twitter tweets. I laughed so much with his book.

The internet has the illusion of permanence. But Amazon can change the terms of agreement about the books it stores that you bought, and think you own, and they could take it away or charge you more to store it. Blogger and WordPress could just go out of business. I felt entitled to Google Reader, and then they just discontinued. Then the next company I used stopped too. A quick reading, and I couldn't find out who pays for the space to store the websites of WordPress. Turns out you choose where to host it. Obviously I use Blogger, and I fear one day Google will charge for hosting.

I can't remember the science fiction book I read where it talked about layers of code, about ancient code layers. I know a computer scientist who was hired to go back and look on some of the original code layer he created.

Sometimes you go to look for a photo and the file has been "corrupted". How did that happen?

The internet is impermanent. I bet when the sun expands and engulfs the earth, that we have found another planet to get to. But will someone come and download earth's internet and transport it to another planet. Will their be interplanetary internet? Bet that connection will cost. Can you imagine a wire through space, like the wires they laid down along the Atlantic ocean for telephones.

I wonder how many people alive today will be considered enlightened by succeeding generations. I still think about the scifi book Forever Peace.
Posted by S. Bell at 11:13 AM