On most retreats, I forge deeper connections to archetypal Bodhisattva. Last year I got into Ksitigarbha, which was appropriate because I was working in a prison at the time. I've had a lovely retreat on the historical Buddha, Gautama Buddha. My first connection was to Avalokitesvara. Then to balance that out I got into Manjushri, the two are seen as going together, wisdom and compassion. I've talked to people about various jinas. And of course the extensive work on the prostration practice to the WBO refuge tree, has us exploring these grounds over again. I have read Vessantara's Meeting The Buddhas, and I want to reread it all again, though mostly it's a reference book to look into. It's hard to digest it all. I suppose some people can swim in these kinds of waters, and I'm getting better at that. Some people don't respond to the archetypal Bodhisattva, and that's OK. There are many tools on the path, it's up to you to try and check them out. Of course it's also worthwhile to try some, maybe more than once, because others before on the path have used them.

Amoghasiddhi represents fearlessness, unobstructed success. We had a really cool mantra on the retreat about him, and I sang it all the way home. I've been chanting it a lot, and thinking about him. So I just wanted to remember when I first got my connection to Amoghasiddhi. I think I've heard a talk about him before, an order member had a sadhana of Amoghasiddhi. So maybe I was introduced to it then, but I did not feel so much of a connection. It was through mantra, in the midst of a retreat, during a puja, that I forged this connection I'm feeling strongly.

(All links to Wikipedia, the amazing on-line, open source encyclopedia, which you can improve!)

In an endnote, there is an order member in the WBO that is named Amoghasiddhi, and you can read his story by clicking on this sentence.
Posted by S. Bell at 9:02 AM No comments:

So in a way a retreat experience is inexpressible to people outside the spiritual community. Of course I talked a lot on retreat to my spiritual friends. I suppose what I'm doing is to try and think about he retreat now, as a kind of way to keep it alive. Of course I write in my journal and to friends.

In fact, spiritual friendship is one of the keys to retreat experience. I get into a kind of tender and soft place, and that makes me more open and receptive. That's what the retreat was about--receptivity. We focused on the acceptance verse in the public ordination, "with loyalty to my teachers." One aid in that is the Cetokhila Sutta. This translation is a little different, in ours it talked about "ardor", which is a lovely word. I'm not going to go into the sutta, except to say that I have to kind of map it out on a sheet of paper to make sense of it. Because it's from an oral tradition it has all these mnemonic devices to help the monks memorize it, and that makes it actually hard to me to hear it. My mind wants a kind of outline or a story. The other thing I would say is that I uncovered personal reasons why, in my mind, there is subtle doubt about companions in the spiritual life, and I worked hard to understand the barriers I put up. My isolation is becoming less and less tenable.

How do I become more soft, tender. Lots of meditation. I have to say, compared to most of my brothers, I'm too wiggly of a meditator. I'm not so flexible, and I quickly scratch myself, put my legs up to make them comfortable. Compared to my rock like peers. But this retreat I was trying to appreciate and explore my body, with the influence of old Reggie Ray and his last book on somatic meditation, and Paramananda's book The Body. So, when my knees began to hurt, I investigated, tried to bring a sense of play instead of feeling trapped. I get twisty knee pain when I sit in a modified half lotus, and straight on knee pain when I used my bench. There's a kind of princess and the pea situation where I pile up a bunch of mats to try and not feel hardness on my knees. I would modify my posture to put more pressure on my butt, but then I would be hunched. I was trying to keep my body aligned, the hips at the right angle, my head at the right angle, my arms just so, and my shoulders not hunched.

So the pain would lead to a panic attack, and the panic attack led to emotional pain. I cried a lot. Someone put a brownie on my pillow Wednesday. The cool thing was that I thought anyone on the retreat was capable of it. That kind of kindness kills me.

So in the company of men, we told our life stories, and met in small groups and heard talks, lots of discussion of the Dharma. I have to say, I love Dharma talk. We also went on walks with each other, I thoroughly enjoyed talking with everyone. I have to say it's a special group of men. The food was good. It was more nature than I'm used to in NYC, so I enjoyed looking at green, seeing trees sway in the wind, sitting outside.

Here's what google earth shows as the two domes:

Looks pretty green around there. Here's where I live on Google earth:

Not my real address by the way but my neighborhood. Anywho, to continue. We also listened to a good talk by Subhuti on just sitting meditation.

I also read David Smith's book, A Record of Awakening. Someone mentioned it, and I'd forgotten it, so since it's short, I read it again. I never got to read the letter as to why he decided not to try and join the order, and started his own sangha. It's funny, there are a lot of controversies going around the order, but out here you kind of miss them. Something to talk about I suppose.

So, that's all I want to say for now. I have to say, I'm not sure what my point about communicating this stuff is to the strangers, I question blogging. Am I some kind of exhibitionist? Am I really adding to the knowledge of the Dharma? I doubt it. I expect it's kind of like a public notebook record of my spiritual life, and that's not a horrible thing. I hope everyone is well.
Posted by S. Bell at 9:29 AM No comments: 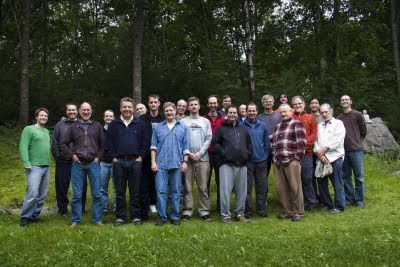 I'm off to a retreat tomorrow. I'm very excited. With work school and family, I don't do retreat as much as I would like, but then again I chose to have a family and work, I chose an intense profession. It's a great thing that my wife doesn't raise a stink about taking care of our 2 small boys while I'm gone. Not too much. I encourage her to go on retreat, but she doesn't want to be away from the family and thinks I'm a little crazy to do it.

I don't work at Aryaloka so it's fairly untainted for me. I have dreams where I'm trying to get there. The retreat will be 9 days, men only. I enjoy being with men. I like single sex activity. The retreat is also for men who have asked for ordination into the Western Buddhist Order.

My friend jokes, so you can marry people? People ask me if I'm going to open up a church? Here is what the F/WBO has to say about it. I don't think I'm getting ordained any time soon, but I feel impatient to join the order at times. I reported in, answering questions, in an e-mail. Ongoing work in trying to deepen my practice.

I'm looking forward to a retreat from electronic devices. I don't even really read much when I'm on retreat. It's going to be a lot of face to face conversations, meditation, healthy vegetarian grub, chanting, discussion, puja and confession. I hope to go for walks and look and appreciate trees and the river.
Posted by S. Bell at 8:33 AM No comments: