Petal to the metal

Petal to the Metal

There were 2 movies that very much influenced my early thinking, that I saw as a prepubescent impressionable child. One is Animal House. I wanted to go to college because of Animal House. Peer pressure was another reason. Everyone I knew was going. Of course when I went off to college, I was anti-frat, and Animal House didn’t have any meaning for me. I guess it’s a sense of playfulness that I really liked about Animal House. I think play is really important. But I digress.

The second movie that influenced my impressionable mind was Smokey and The Bandit. In this movie, Burt Reynolds plays a foot loose and fancy free man who has a fast car. They get paid to make a quick truck delivery and he runs a distraction from the truck. Police go after him and thus the truck gets to keep speeding. The Reynolds character drives a Trans Am. I still think that’s a cool car, maybe some day I will try driving one. I wonder if I could rent one for a week. I don’t really need to own one, it’s probably a gas guzzler. Anyway, I digress.

One of the ideas in Smokey and the Bandit is, “put the petal to the metal,” meaning put the accelerator to the ground of the car. In those days I suppose carpeting wasn’t standard the way it is now.

So for me putting the petal to the metal in my spiritual practice is an interesting idea. I always think about Bhante’s point that a little effort is like stretching a rubber band. It just snaps back. Be he also talks about trying to split a bolder in half. If you hit it 19 times, do those times not count, when it splits on the 20th? So in another way, I wonder if you can’t make real progress as a worldling. Can I take advantage to what has been given to me. Some spiritual leaders will say ordinary life provides good opportunities for practice.

flowers on a shrine 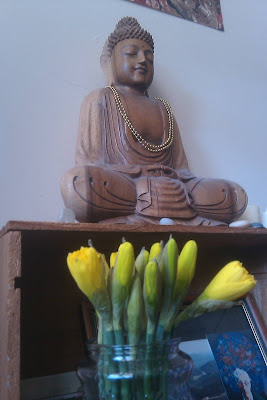 Another theme gleaned from Free Buddhist Audio and Triratna Buddhist News, is that the so called Honeyball Sutta has been read a bit. I enjoyed the talk by Maitreyabandhu yesterday and I'm going to listen to other talks today. I'm having a practice day of meditation and Dharma study at the Rego Park Buddhist Center in Queens NYC, USA. It's a warm up for the practice day for the NYC sangha in 2 weeks.

Here is a video of Subhuti talking about the sutta:

Going to study the essay that came out in December 2010.

So I've been rereading it. Looked up the Nagaloka statue.

It's not a giant Buddha.

Anyway, so there's a lot in Re-imagining the Buddha, but the most important thing is that it puts the Pali Cannon and the Buddha above later developments in importance, which isn't really a surprise. Supposedly someone asked in India, about the TBC, "what yana do you practice?" The fellow answered, "Buddhayana".

So this essay is also accompanied by talks by one of the movement's leaders, Subhuti. You can find them on free buddhist audio. Click on this sentence for a lead meditation based on the Tiratna Vandana.
Posted by S. Bell at 7:52 AM No comments: 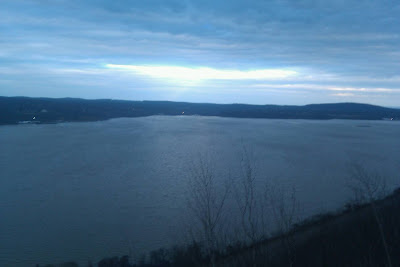