In bell hooks' all about love she writes about the importance of honesty in association with love in chapter 3. When someone asks her if she liked a present, she is honest with them. Often times people are upset at what they hear.

I think sometimes in language you have to translate social conventions into what they really are. If someone asks if you like a present, they want a thank you really. They don't want honesty. They may want a hint of honesty, to see if it was a good present or not. To my utter shame and cringing I once told my uncle that I didn't really like the Star Wars spaceship he got for me for Christmas. I think the sentiment is wonderful. My uncle loves me and tried to get me something I would like. All kids liked Star Wars. He was really sweet and I responded with harsh truth. I think speaking the unvarnished truth, at times, is socially jarring and shows a lack of empathy for the other person.

Another example is, "how do I look?" I think the important thing to communicate is that you love someone, find them capable of being attractive, that their presentation matches the awesomeness that you see in them. To say, "I don't like bangs," or shoulder ruffles or whatever isn't really something to break out at that moment if it is the truth. Of course people will be angry if they later find out that you don't like bangs, so there is some questions. Anyway, if you want to go ahead and say you're, "not a fan of bangs, but they seem to pull it off," that captures both truth and commitment to a person.

This brings up the question of verbal dexterity. I'm not great in the moment in communicating often. It is to not accept me to think I should stop this immediately. I've been learning scripts my whole life to try and be apt in the moment, but novelty outstretches my experience. I think to not understand that communication is a first draft, it perhaps a bit harsh.

Some people can hear the intention behind the words, and that is quite a lovely skill. But to use that knowledge for lying, well that's mendacity.

Having written that, we live in a time when lying seems to be OK for the President of the United States and his staff. And as per bell hooks, I'm not feeling a lot of love from the executive branch. 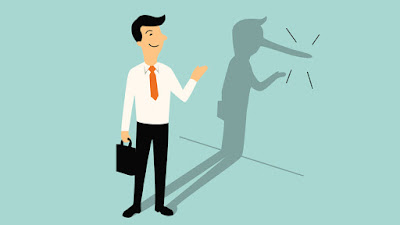